(This page still being tweaked and updated, but here is where you will normally be able to find the most recent recording.)

Have you got any idea what happens when you move to the middle of a tectonically-active desert region and then start sucking enough water out of the ground to pretend that you're NOT living in the middle of a desert? Well, you will after this episode! Today's paper is about problems this causes with trying to keep track of earthquake-related activity in the Los Angeles region. 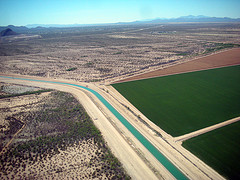 You can directly download the show audio files below:
Click here for Super-Spiffy Higher-Quality Ogg Vorbis audio (which may only be usable in newer devices and software)
-or-
Click here for Lower-quality older MP3 format that should play in even old software or devices
(Ogg Vorbis is a higher-quality format but is not as widely supported as mp3).

(I'm working on a feature to have the individual notes appear along with the embedded audio at the appropriate times, but it's not ready yet.) (The show notes are ALSO embedded in the audio file as a "comment" if you need them later.) Discuss this episode, the show in general, questions or problems with the site, the dubiousness of my ancestry or personal hygiene, or whatever here...


Links to Previous Episodes:
Pilot episode: "Babies understand dog-language (or something like that)"